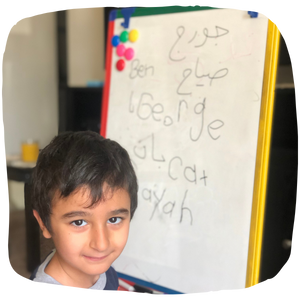 Every family has a story. George’s family’s starts in Lebanon in 2016. He was born in a time of relative peace. Soon though, the security situation in the country went downhill. George’s father Samer decided to move to the United States and settle in Asheville to make a better life for his family. After a little over a year, he was able to bring George and his wife Joelle over to join him.

George’s early life was rocky – after one large explosion only a few miles from them, George asked his mother Joelle, “Did we die?” Fortunately, they were not hurt. His early learning was disrupted first by large protests in the country, then by COVID. He was able to do a year of virtual preschool, but online learning for three-year-olds is not the most engaging.

Things started to look up since George’s arrival last November. Samer told us, “I was surprised that whenever I needed help here, I found someone to help me. Stacey (from the Buncombe Partnership for Children) found a good spot for George in the NC Pre-K program in Fairview, where he’s very happy. He told me that they’re playing Arabic songs in his class for him to share his culture. They’re working on greetings and counting to ten in Arabic.”

When we asked George what he likes best about pre-kindergarten, he said it’s the lunches. His mother Joelle laughed and said that he doesn’t eat much because he’s a picky eater.

Joelle brings him to the library every week to check out new books. George’s favorite right now is Go Dog, Go. He also likes to watch Paw Patrol and Wolfoo and Pando, learning new words and about the culture here. Samer said, “One time he came to me and said, ‘If something happens, you have to call 911.’ When I asked him how he knew that, I discovered that Wolfoo and Pando are animals who are an American family and he learns from them.” It’s easy to see that he’s sponging up everything he can learn, including learning to write. It’s a little bit complicated since his native Arabic goes from right to left and English goes from left to right. 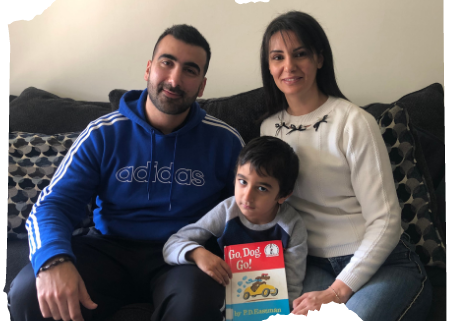 We support children’s learning at home and in child care centers and schools. George is one of the 430 students we help to place in preschool every year. 20% of those students have limited English proficiency. 25% of them have a disability. 69% live at or below 130% of the federal poverty line. Preschool is a time when students can get to know each other above and beyond these differences. It’s a time for them to accelerate their learning and enter kindergarten one step ahead.

We invite you to donate today to help other families like George’s to write their stories. Your gift will support them to find the right spot for their children to learn and grow. It will help early childhood educators get the trainings they need to meet their students where they are. And it will support health and literacy for children and strengthen the entire child care system in our area.